My husband and I were preparing to celebrate Valentine’s Day beautifully and romantically — gifts, a restaurant …

When grandmother found out about this, she reacted to our decision with irritability that is surprising for her always calm nature — they say that we are stupid young people, we honor an alien (Catholic) saint, but we don’t even know about our own people, and five years as a family.

Many grandmothers scold young people in general and their grandchildren in particular, but my granny doesn’t have such a habit, and if she suddenly curses, then the reason is serious. Well, we did go on a date, but that same week I visited the church, talked with the priest … Indeed, I didn’t know how much! 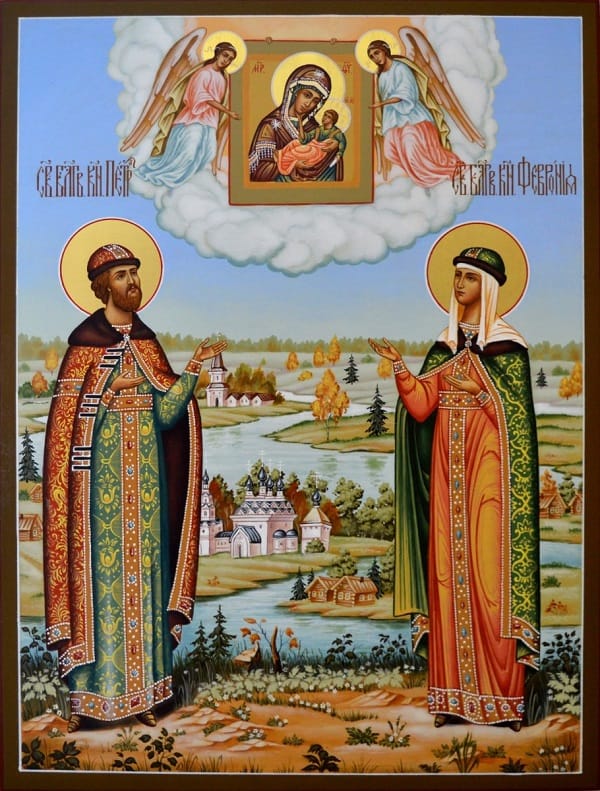 Peter and Fevronia: why we love and honor these saints so much

These are Murom princes (end of 12th — beginning of 13th century), very pious. Although only Peter in this pair was of a noble family, Fevronia was from simple villagers. But the Lord gave the girl the gift of healing. She saved the young prince from the wounds inflicted on him by an insidious serpent, and in gratitude Peter took her as his wife.

When he became the ruler, it turned out that not all the boyars, and especially their wives, are ready to serve the former villager. So that in the wards they would not persecute the life of his young wife, whom Peter managed to fall in love with, he refused power.

Boyars at first were very happy, because now one of them could become a prince. But when they began to divide power (some died at the same time), they realized that this was a complicated matter, and … Nizhayshe asked Peter to return. 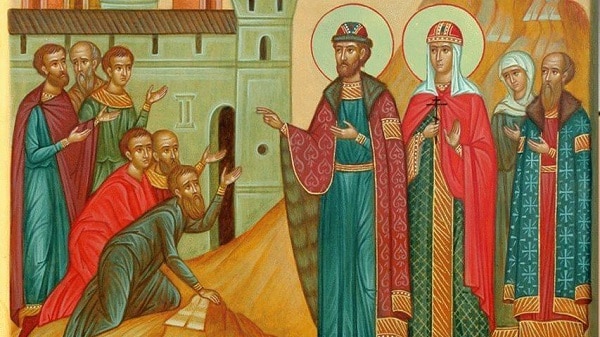 He was a wise ruler for his city. When the couple grew old, they decided to become a monk. Throwing away worldly names, they became David and Euphrosinia. And, although they lived in different monasteries (male and female), they bequeathed to bury themselves together.

True, when both died (at the same time!), Brothers and sisters considered it a sin to bury a monk and a nun in the same grave. But a miracle happened — their bodies moved, being in one coffin. Therefore, they were buried, as bequeathed, in Murom, in the Trinity Monastery.

The nationwide love for these saints can be confirmed by the huge variety of icons created over the last two decades (after all, until the 90s of the 20th century it was even forbidden to think about Orthodoxy in our country, so most of our fellow citizens learned about this God-fearing princely couple recently).

Icons are created drawn and carved, embroidered with beads and even poured in precious metals. 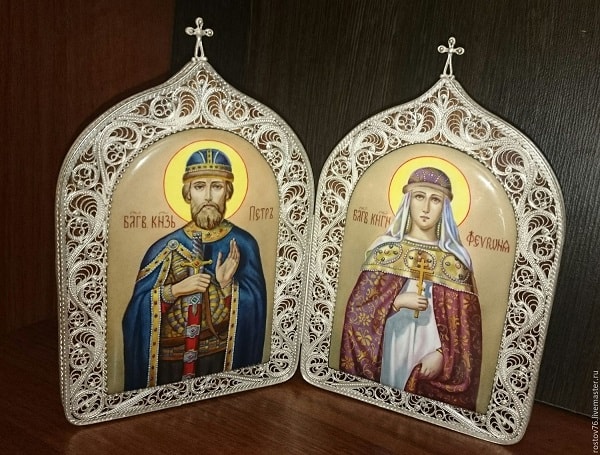 In addition, the icon makers not only capture belt images of saints, but also recall many episodes from their lives: 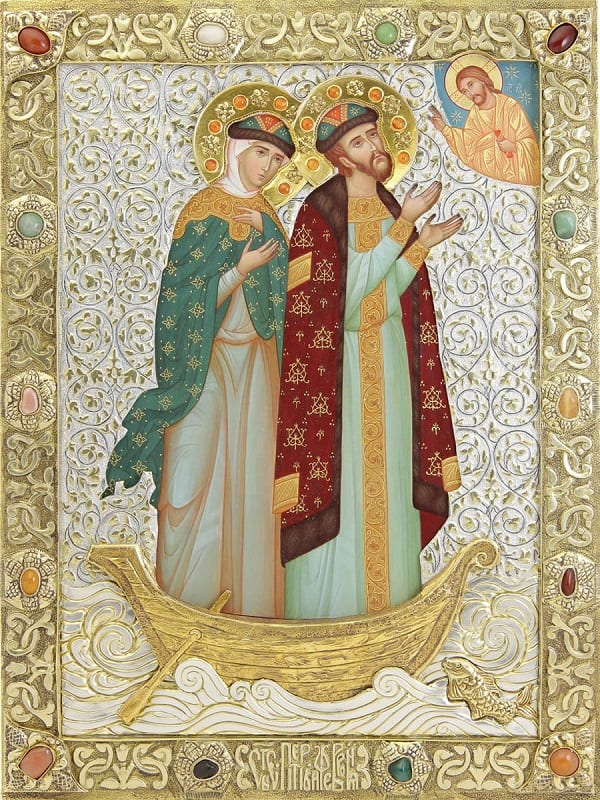 Some of them are antique, although sometimes you can see truly ancient images: 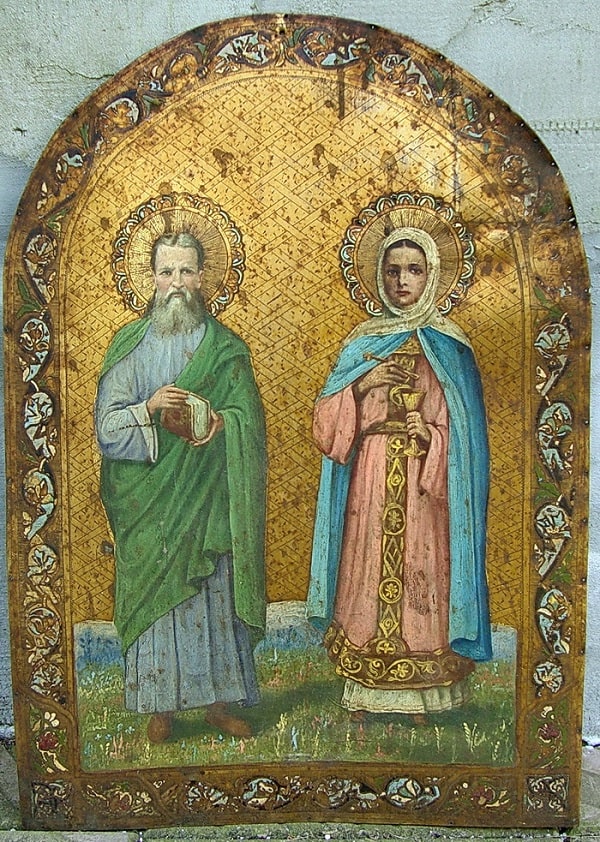 It is a symbol of loyalty, love, mutual support. They are an ideal married couple, on whom everyone stands equal — both young people gathering together and wise married couples of many years of experience.

Often on the icons depict Fevronia, embracing Peter or touching and trustingly leaning his head on his shoulder. Such images say: the family will be strong if the spouse always supports his chosen one.

In addition, the biography of the saints teaches: a man must show both strength and kindness, and a woman not only meekness, but also perseverance, if it comes to love (after curing the prince for the first time, Fevronia felt that her elect could not hold back the word and will not lead her down the aisle, so she left a wound that did not heal, which later returned her beloved one to her). 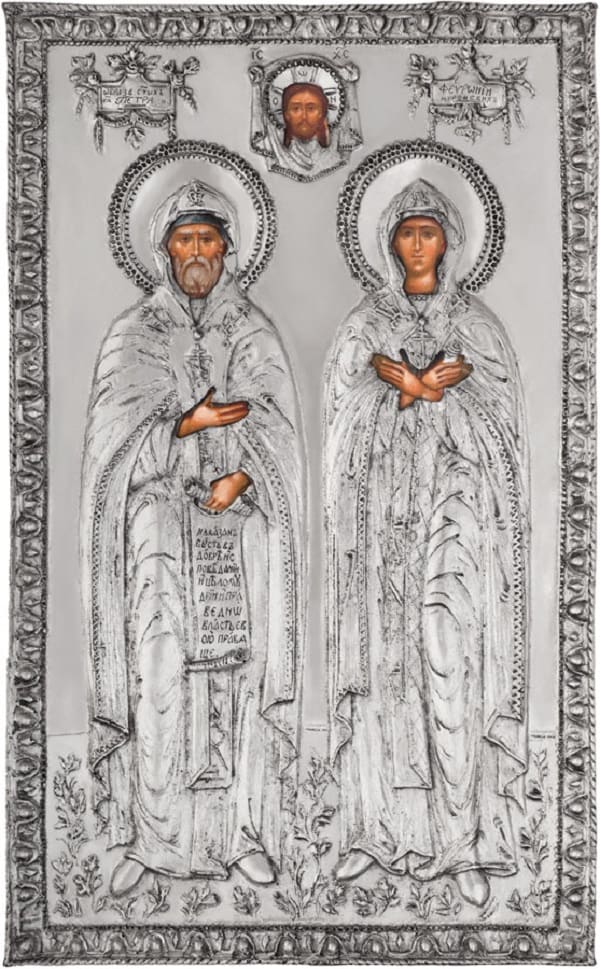 Many people ask: is this a wedding icon? Is it possible to give it to young? Yes you can! And it is even highly recommended, because such a face will protect their marriage from all sorts of family adversities.

Some people believe that it is not enough to buy an icon — so that it is guaranteed to bring happiness, it is worth making it yourself, for example, to embroider it. But in this case, be sure to consecrate it in the church — without this ritual, the embroidered icon will be nothing more than just a beautiful picture. 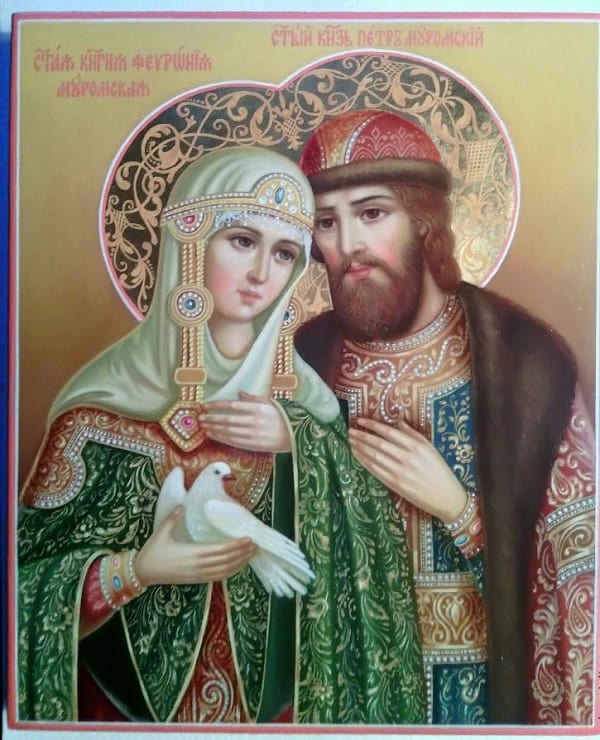 Most people for honeymooners choose an icon with pigeons. Although of course, other images (say, Peter and Fevronia in the boat) are also suitable.

Remember: the day of memory of these saints — July 8. This day is called the Day of Family and Allegiance. Be sure to pray your icon when this date comes!

In which temple is the most revered image of Peter and Fevronia? In the church of the Small Ascension (Moscow). One of its thrones was erected in honor of the holy charitable couple. 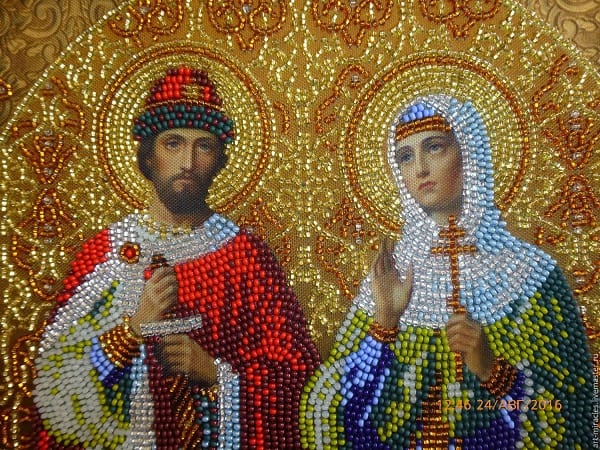 You can ask not only about yourself or your family, but also about any other couple you are worried about: for your parents, children or grandchildren, even for your neighbors or acquaintances. The main thing — sincere anxiety and love.

Are there any special prayers that should be addressed to this particular image? There is! Of course, being in church, you shouldn’t pull a piece of paper out of your pocket or try to memorize a difficult and long prayer if you are not sure of your knowledge of the text. In the temple, not the harmony of words is as important as the sincerity with which they are pronounced, so that there it is better to communicate with the shrine in your own words, from the heart.

At home, in a calm and relaxed atmosphere, read this prayer. It was approved by the Moscow Patriarchate: 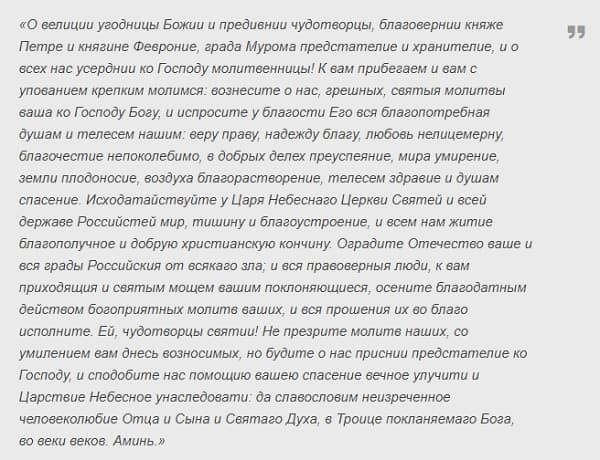 There is a shorter version of the prayer:

Want to know more? Fine! Then I suggest you watch the film about the spouses Peter and Fevronia. You will see the temple in which the relics of the saints rest, as well as go on a historical excursion into the old Murom. The film is very informative, both religiously and historically:

2019-10-04
admin
Предыдущий The bird flew through the window for luck?
Следующий What are the distinctive features of the signs of the zodiac in October