Icon of sv. Matrons of Moscow — meaning, history, what helps, how to pray + photo

The holy matron is the most beloved and especially revered by the people saint. From birth, the Lord rewarded the girl with miracles, depriving her of the most important thing — the opportunity to see the world with his own eyes. But this did not stop the girl from devoting herself to spirituality and sharing her knowledge with other people. She could quickly read the minds of people, saw pictures of their sins, healed the prayers of illness, strengthened their faith in God, saved them from innocent death. Her journey on Earth is a set of great feats of patience, devotion and faith.

There is an icon of matron Moscow in every Orthodox church, it also protects the home of believing families. Every year, on the second of May, all believers celebrate the day of memory of the great saint. 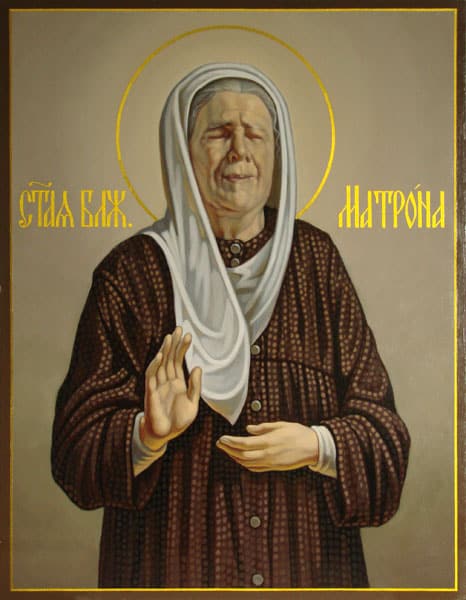 Matronushka was born in a poor but religious family. Even before her birth, the mother decided to send the child to the shelter, because she had nothing to feed the baby. But one night a vision came to the woman: a white bird with large wings sat on her breast and, silently, looked straight into her eyes. It is not strange, but the bird could not see anything — it was blind. This vision became significant for the family and the parents immediately abandoned sinful intent. A few days later a girl appeared in their family.

Matronushka, like a bird from a vision, was deprived of the opportunity to look at the world with her own eyes. Moreover, her eyeballs were not even formed — the eyelids, as if rooted to each other. On the infant’s breast, parents immediately noticed several bulges in the shape of a cross. In the days of fasting, the child refused to eat the mother’s milk. Baby these days could sleep all day, her parents put a lot of effort to wake her up. And when she became a little older, she uniquely found the icons in the house, removed them, and talked for a long time with the faces of the saints.

As soon as the girl was 8 years old, she had the gift of healing ailments, and a little later she predicted the future, she could read what people were thinking. A year before the age of majority, another tragic event occurred in the life of Matronushka: the girl had failed legs, and since that time, she was no longer able to move independently. But she did not lose heart and considered spiritual strength to be the cause of her ailments. Once, after serving in the church, the saint met a woman. From above, she was shown that it was communication with her that would prevent her from walking. So it happened soon.

In the 17th year of the last century, Matronushka was obliged to leave her home, because in difficult times it became difficult for her relatives to take care of her. The girl, not having where to go, wandered around familiarly, spent the night where she would get: often it was a temple, other people’s apartments, basements. But it was she who saw that the war would soon begin, and Joseph Vissarionovich himself secretly addressed her to find out the future of Russia.

A few days before her death, Matronushka already knew that she would soon leave this world, but that didn’t scare her.

Important! The saint before her death appealed to all parishioners with a request not to forget her and ask for help. Even being in heaven, she will help everyone who turns to her.

Before asking for help from an old woman, you need to prayerfully turn to Jesus and the Virgin Mary. Only after that can one pray to mother that she has assisted in the fulfillment of the prayer before the Lord.

The saint can be addressed not only during worship, the power of prayer does not become less at home near the icon of the saint. What is important is not the environment that surrounds a person, but firm faith in the Lord and in the fact that they will hear him.

Holy people is considered a noble patroness. She is addressed with any unresolved issue, and she will definitely help to find the right way. Prayer, by its strength, is very effective.

Important! During her lifetime, the saint did not refuse anyone, fulfilling every household or serious request. But it categorically forbade people who ask for help to pray to God at the same time and go to magicians, psychics and other supporters of dark power. Otherwise, Matronushka will not help, and will turn away from such a family.

The parishioners who have committed a terrible sin, with the request to beg forgiveness from God, often turn to the miracle-worker. Especially the saint protects orphans, who since birth are devoid of maternal love. She will help everyone find their home and fill it with love.

Initially, the saint will help those who need her help and can not continue to live without faith in a miracle. With prayer, various miracles happen.

In any photo or icon, the saint is depicted blind. Previously, such faces have never been created. It was believed that the saint depicted in the icon is a type of Christ, an ascetic in Eternity, and there, of course, there is no place for various diseases.

But the image of Matronushka allows people to understand that she had something more — spiritual vision and great faith in God. If you compare it with ordinary people who can see but do not understand anything, a blind girl could see everything she needed and knew a lot of things. Therefore, blindness is very symbolically displayed on the icon and has a completely opposite meaning. 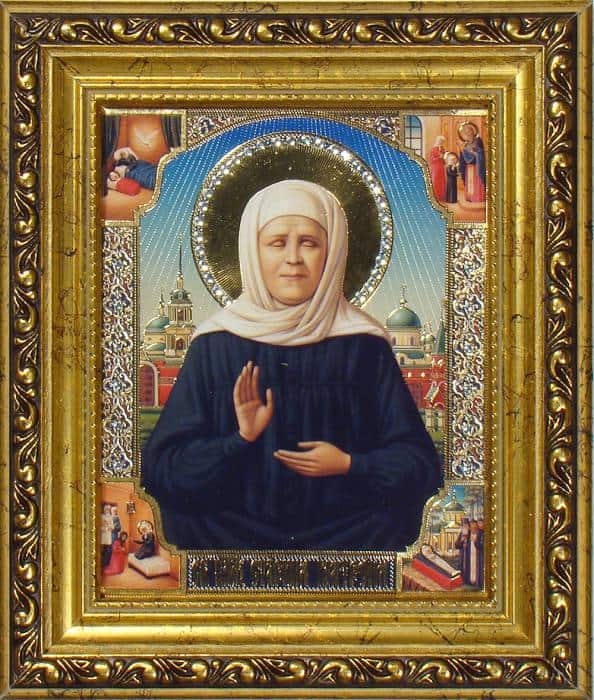 You can find other faces of the saint, where the mother painted with open eyes, which introduces some parishioners in a stupor — after all, during life she was not like that. Therefore, many people do not consider such an icon effective and do not turn to it.

Icon painters often paint the face of the saint in shades of green. This can be explained by one canonical tradition: before the faces were painted only in green clothes. The healer has a rosary in her hands, symbolizing her faith in God and following him in mortal life. The holy right hand is always open — it symbolizes openness to people and a sign of faith.

A white scarf covers the head of the saint, which symbolizes the holiness of the image, purity and purity of the woman depicted in the icon.

Face the saint necessarily put on the iconostasis in the Red Yeah, which is settled on the eastern side of the house and is located opposite the entrance. The icon should be located so that the person who enters the house, immediately drew attention to the face of the saint.

Often the icon is covered with white cloth from two sides, decorated with embroidered flowers. It is allowed to keep Holy Scriptures, candles, and other items near the face that are important for performing daily prayers.