Queen of the Tarot Cups

If the Queen of the Tarot Cup falls out — the value may not be as simple and clear as it may seem at first glance. The main interpretation of this card is a caring and loving woman who has the gift of divination.

However, even she has dark sides.

Queen of the Tarot Cups — meaning in layouts

In the upright position The Queen of the Tarot Cups denotes a powerful intuition that can easily reach the level of clairvoyance. It is she who helps you achieve success.

There is also a tendency to empathy, altruism and healing. This card is related to prophetic dreams, it is a wise sorceress who lives in the most questioning.

The source of such wisdom is hidden from you, and you will not be able to learn about it through reflection. 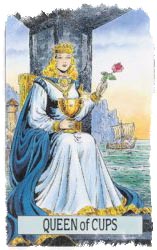 If you got this card, it says that you often let your fantasies prevail over common sense. Sometimes you are too immersed in dreams and can not adequately assess the situation, but at the same time the Queen of Cups can mean a new level of understanding of the situation.

Perhaps the fact is that at this stage, emotions play a big role. This is especially true if a personal relationship is involved in the question you ask the tarot cards.

You are a loving person with a pleasant character and a good reputation. Your opinion and experience is appreciated, your decisions are trusted.

However, sometimes you are too much immersed in dreams and do not notice the real state of affairs, from which you may suffer.

The Queen of Cups advises you to look more often into your soul and look for answers using your subconscious and intuition. Pay special attention to prophetic dreams, their offensive in the near future is very likely.

Significance of the Queen of the Cups upside down somewhat different from the essence of the card in the usual. She speaks of self-deception, life in the illusory world and the tendency to often take what is desired. In addition, the value of the Ladies of the Tarot Cups in an inverted position — bitterness, willfulness and a tendency to exaggerate both bad and good events.

Guessing is not a reliable assistant.


If you ask him for help, you can see manifestations of imbalance and irritability.

Besides, inverted The Queen of the Cups speaks of contempt for traditions and laws, as well as the misuse of existing knowledge and mind of the questioner. Sometimes this card predicts manipulation of emotions, play on feelings and betrayal, gossip and condemnation of society.

The news you receive is guaranteed to be bad.

It is extremely likely that you will be left alone with problems. The cause of these problems is usually the revenge of the woman you hurt in the past. It will interfere with you by all means, most likely secretly.

An inverted map reminds one who is wondering that difficulties should not change his character and opinion about phenomena that are important to him.

What kind of personalities does the Queen of the Tarot represent?

The value of the Queen of the Tarot Cups in this case is a woman, all of whose expectations and perceptions justify her hopes. She feels harmony between all the components of the world, the fullness of being and confidence in success.

It is safe to say that this woman is happy and loved. She has the gift of anticipating events, so she often turns out to be right in her convictions. This lady is always ready to help and listen if necessary.

With high probability she has blonde hair.

In general, the Queens in the Tarot rarely reflect the situations and emotions of the fortuneteller. Most often these are real people. Quite often the Queen of the Cups represents in the divination the mother of the questioner or the woman who replaces her.

Usually this card represents a mature woman, not a young girl. But sometimes we are talking about a man who has female character traits — love for children and nature, for example.

Inverted The Queen of the Chashes is a woman in anger, betrayed or offended by your past. This may be a deceived lover or ex-wife, which you rejected in favor of another person.

It is possible that the matter is only in her prejudices that you do not meet. The lady in question dissolves gossip about you, but it is unlikely that her revenge is limited only to them.

Besides, inverted the card may indicate that you are dealing with a woman who has become embittered as a result of difficult events in her life. In this case, revenge is absolutely nothing to do with it, the matter is solely in the difficult nature of the opponent. She feels outlaw, she can be condemned in the team, so she will never go into open hostility.

Opinion surrounding and belonging to a certain elite club is very important for this woman.

The value of the Tarot Queen of the Cups card says that now you are at rest. You wait, not forgetting to listen to the voice of reason and keep the events under control, in order to immediately feel the further path for developing yourself as a professional in your business.

The Tarot Queen of the Cups card indicates that the questioner has a talent for imaginative thinking. Maybe it’s time to make it part of your profession.

Sometimes a creative passion becomes a good source of income.


Probably, you are waiting for a career as a writer, artist, singer, actor, radio host or musician.

Sometimes this card speaks about the career of an esoteric or clairvoyant. Perhaps your gift is developed to a level that allows you to help people.

If you are confident in your abilities, you can try to provide magical services to those who need it.

Queen of the Tarot Cups — meaning in a relationship

The value in relations of the Queen of Cups is an affinity with the aroma of mystery and vivid sensuality, the possibility of the existence of such a connection simply fascinates the questioner. In addition, the card represents absolute trust between partners and attentiveness to each other’s needs.

The Tarot Queen of the Cups card says that the next period of your relationship will be extremely pleasant. You expect a rapprochement and increased confidence in the partner, mutual feelings.

In general, your relationship will become exactly as in your dreams.

If a lonely person wonders how the situation on his personal front will change, with the help of only the Queen of the Cups it is impossible to say.


The value of this card reflects his dreams, desires and expectations from a partner, which the fortuneteller would like to meet.

Dame of Tarot Cups — value at the level of consciousness

The Queen of the Cup of Tarot reminds you that enlightenment comes from the depths of the subconscious. To get inspiration, consult the source.

However, remain insightful so that you will not be overwhelmed by unfulfilled desires and unrealizable ideas.

In addition, the card hints that the human consciousness is tuned to the perception of images that are sent by the subconscious. It is from there that your desires appear, the different nature of foreboding, as well as fears and even dreams — both terrible and pleasant.

All these images can be sources of inspiration for creative activity. Perhaps you should show your talents, even if creativity remains only a hobby, it will bring a lot of benefit.

If you decide to delve into the subtleties of interpretation, the Lady of the Cups may indicate that the diviner is close to restoring the overall integrity of the shadow part of his soul.

Queen of Cups and combinations in the Tarot system 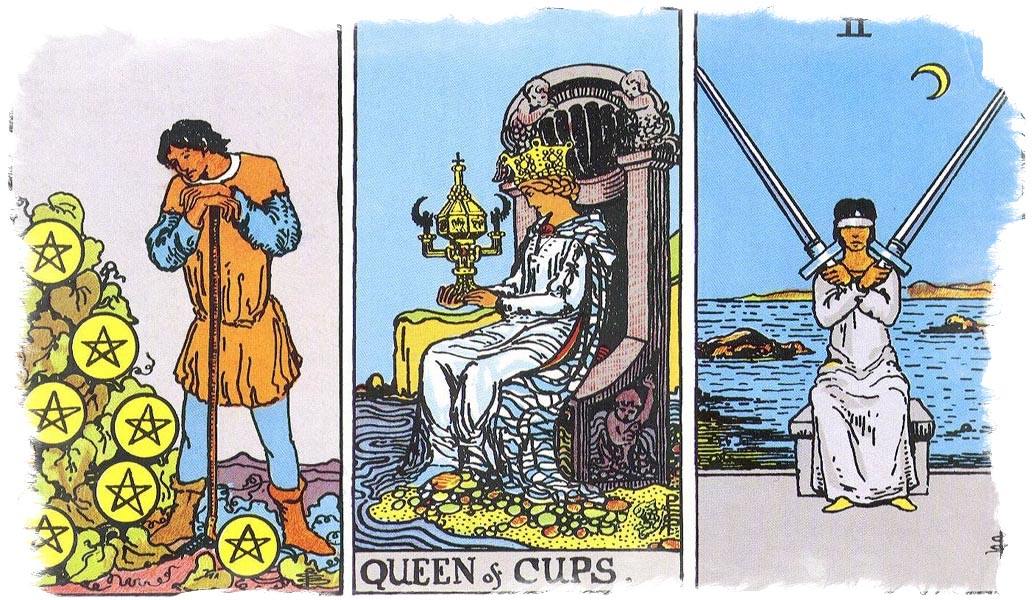 Knowledge of the interpretation of combinations of cards with each other allows you to get clearer and clearer predictions. For example, it is known that the Queen of Cups reminds of strong intuition and clairvoyant abilities.

The combination of this card with the High Priestess says that you are dealing with a practicing magician, a person who studies esotericism or psychology.

The combination of the Queen of Cups with the card of the Empress speaks of a pregnant condition. Why state, but not pregnancy? Because bearing guessing can not only a child, but also some kind of project or idea.

If this card falls next to the Emperor’s lasso, the prediction concerns the creation of a family.

Combination with the Force indicates the source from which the fortune-teller can draw spiritual strength and inspiration. His source is in the feelings and emotions that he experiences. If instead of this card there is a Hermit, the person you are wondering about hides his feelings.

Perhaps to hide the true emotions — advice for guessing in this case.

In general, the Queen of the Cups can seriously confuse even an experienced fortuneteller. However, if you understand the full meaning of this card, you can find the answer to the question you asked Tarot cards during divination.

2019-09-12
admin
Предыдущий Meaning, which have a tattoo in the form of wings
Следующий Guest marriage is becoming more popular.

When the Ace of Tarot Wands goes to fortune-telling, the significance of this fiery map can seriously please people who ...